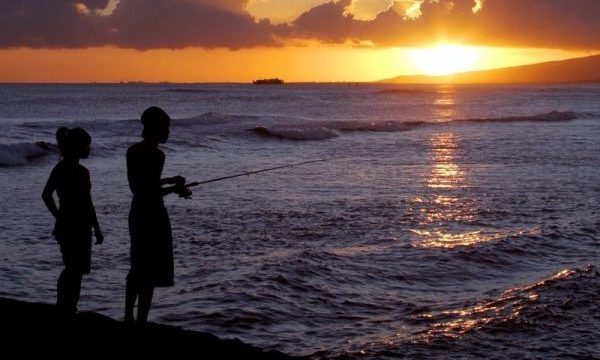 As a Hawaiian resident or a tourist, there is no limit to the outdoor activities you can do, especially if you’re very adventurous. If you have never been fishing in Hawaii, you should consider getting into it. Here’s what you need to know about shorefishing in Hawaii.

Fishing In Hawaii- What You Need To Know

The Hawaiian Islands are surrounded by the Pacific Ocean, which contains a lot of different types of fish. Try taking a kayak from Kaena Point, the West Side. Jump off into the ocean and you will find mahi mahi (one of the island’s most delicious fish). If you’re in the Island, you can try a mahi sandwich, one of the most common delicacies. Basically, every restaurant in the place offers this sandwich. So, why don’t you try catching the fish for yourself and make your own delicacies right from your own home?

Besides the mahi mahi, another popular fish in Hawaii is the Wahoo, locally referred to as Ono. The word itself means best in the native language. If you go fishing in the island and happen to catch one of these, you should try eating it with walnut sauce. Don’t forget about swordfish and other types of fish in the area that can be barbecued with shrimp too. Therefore, if you’re a fan of fishing in Hawaii, you should definitely consider shorefishing in Makapu’u and other nearby islands. 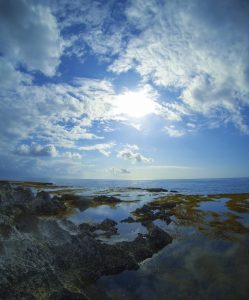 Are There Any Fishing Rules And Regulations In The Island?

Since it’s a pastime activity for most of the residents and tourists in the island, there are very few rules and regulations controlling fishing. Of course, there are some areas where fishing is regulated. That means no one can fish there because there are indigenous or extinct fish in the area. Therefore, it’s prudent to do a lot of research before going out fishing to make sure you’re doing it in the right place.

If these rules are ignored, you could end up getting a very hefty fine. Some of the areas include Oahu and Kauai with each island having special designated areas where you can’t fish. Besides these places, you’re allowed to fish anywhere else in the island. That means, you can try shore fishing near the ocean. Of course, you should be on the look-out for signs that mark specific areas where you can’t go pole-fishing or otherwise.

You don’t need a salt-water fishing license to catch a fish from the ocean when you’re on the island. Most of the regulations in place cover mostly spearfishing, selling fish and also freshwater fishing. That means, you can always catch fish and release them because most of the issues are mostly about selling fish that you have caught. You basically need a special license for that. 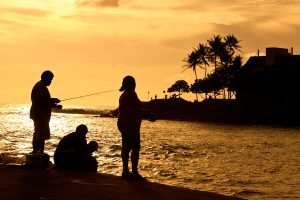 What Are The Common Species of Fish You’re Likely To Come Across?

Since the ocean is riddled with numerous types of fish, you’re likely to come across most of them if you’re fishing in the islands. Of course, because of geography and climate, only specific types of fish can be found here. These include the following.

• Ladyfish (Also referred to as awa’awa)

• Barracuda (locally referred to as kaku)

• Goatfish (locally referred to as moana)

• Lizardfish (locally referred to as ulae)

• Puffer (locally referred to as fugu)

• Needlefish (locally referred to as I’i)

• Leatherback (locally referred to as lai)

• Trumpetfish (locally referred to as nunu)

Besides those species mentioned above, there are lots of other local fish such as the ulua (one of the most popular ones). You can catch a fish as heavy as 180 pounds which might take a lot of fight. Note that, you might actually have to tackle some of the smaller ones too. Take for instance the ulua fish that are usually very large and need a lot of strength to bring to shore.

If you’re fishing on the rocky cliffs for any of these big fish, you might need a little gaffing on a rope to climb down the cliff to the water and bring the fish out. Another interesting fish to catch would be the papio. They are full of energy and can take a lot of swings and runs that might end up breaking your line if you’re not fully prepared. Most people eat the older fish for many reasons but there is always a chanc of high mercury poisoning that’s why other fishermen prefer to throw them back into the sea. Therefore, as a rule of thumb, you should always fish for the younger ones. 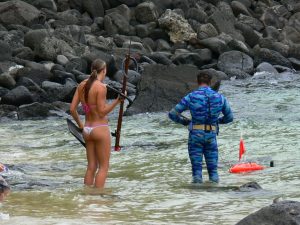 Hawaiian Shorefishing Techniques You Should Know

Keep in mind that fishing in the ocean is a little different from doing it in a stream or lake. Here, the fish are larger, have a lot of energy and also very tooth. Therefore, you need to be prepared accordingly because they are going to make a lot of blazing runs before you can bring them to shore. Try using a long fishing rod, at least 7ft to 9ft. On the other hand, you can shop for fish lures in the local fishing store.

There are different types of lures that can work for Hawaiian fish such as live and cut bait. Some people prefer squid that’s sliced into various sizes then whipped into the fishing with the fishing rods. If something comes out of the water, you’re definitely in luck. Of course, you need to do so in an area with a lot of fish. You skim the bait across the water very fast or slow, whichever brings out the fish.

In conclusion, you can fish in Hawaii at any time, whether first or last daylight. You can ignore the tides at any tides, especially if you’re fishing in an area with incoming or outgoing ones. You’re likely to catch more fish in the tides than without.